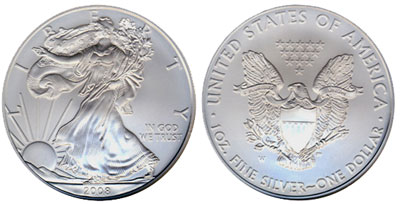 The 2008 Silver Eagle was released in three different versions. The first was the standard bullion version of the coin, which us offered through the US Mint’s network of authorized bullion purchasers. The second was the proof version of the coin, which the US Mint produces for sale directly to coin collectors. The final version was the uncirculated or “burnished” version. These coins have been produced by the US Mint since 2006 as a collectible uncirculated version of the bullion coin. The burnished Silver Eagles are struck on specially burnished blanks and carry the “W” mint mark.

Another notable event for the 2008 Silver Eagle was the discovery of the first variety of the series, known as the 2008-W Silver Eagle Reverse of 2007. Some of the 2008-W Uncirculated Silver Eagles were unintentionally struck with the reverse dies of 2007. The most notable difference is the appearance of the “U” in “United States.” On the Reverse of 2007, the letter will have a bowl shape. The regular 2008 reverse will have a spur on the right side of the letter. It was estimated that around 47,000 of variety were produced.

The figure for the bullion version represents coins sold in 2008, which may include coins minted in multiple years. The proof and burnished figrues are estimates based on the last reported US Mint sales data. The official numbers are sometimes not available for several years.