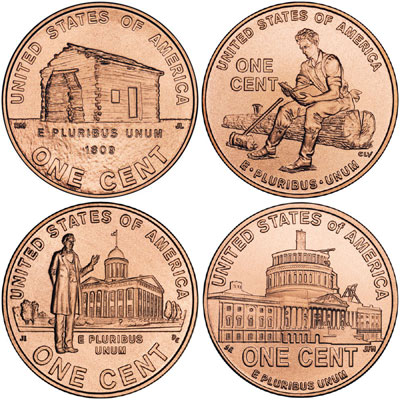 Each reverse design will represent a different stage of Abraham Lincoln’s life. The four following designs will be released in approximately equal intervals throughout 2009:

The obverse design of the Lincoln Cent will continue to use the bust of Lincoln designed by Victor D. Brenner. The first design will be released on Lincoln’s birthday February 12, 2009.

The US Mint will also create special collector’s versions of the coins struck in the original composition of 95% copper and 5% tin and zinc. These 2009 Bronze Lincoln Cents will be included in annual sets issued for collectors and a special five coin set incorporating the 2009 Lincoln Commemorative.

In the following year, the 2010 Lincoln Cent will feature a new reverse design emblematic of Lincoln’s preservation of the United States as a single and united country. This new reverse design is expected to be used for the foreseeable future, replacing the prior Lincoln Memorial reverse.