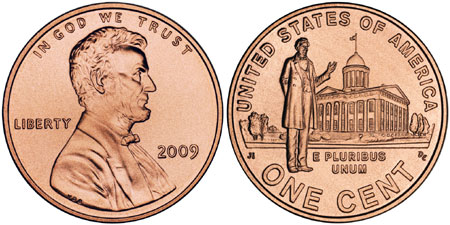 The third issue of the new 2009 Lincoln Cents is scheduled for release on  August 13, 2009. During the year the four different reverse designs for the penny will be released released in roughly three month intervals.

The third design represents Lincoln’s professional life, which he spent in Illinois. Chronologically this covers the years 1830 to 1861. After a variety of jobs, Lincoln pursued his interest in politics and began studying law. He was elected to the Illinois General Assembly and later the House of Representatives. He participated in some well publicized debates with Senator Stephen Douglas and was later nominated and elected as President.

The reverse design features Lincoln standing before the Illinois Capitol Building located in Springfield, Illinois. The inscriptions include “United States of America,” “E Pluribus Unum,” and “One Cent.” The third reverse was designed by Joel Iskowitz and sculpted by Don Everhart.

The obverse of the coin continues to feature the original portrait of Lincoln from Victor D. Brenner.

Details of the official launch ceremony have not yet been announced.