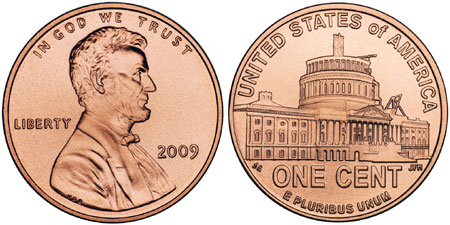 The fourth and final design for the new 2009 Lincoln Cents is scheduled to be released on November 12, 2009. This will complete the series of four different reverse designs which were released during 2009 to celebrate the 200th anniversary of Lincoln’s birth.

The fourth design represents Lincoln’s Presidency in Washington, DC.  Chronologically this covers the years 1861 to 1865. The years included the beginning of the Civil War, the Emancipation Proclamation, Lincoln’s re-election, and the end of the Civil War on April 9, 1865. Only five days later Lincoln was assassinated at Ford’s Theater.

The reverse design features the half completed Capitol Dome. This scene is intended to be representative of a Nation torn apart by civil war and nations resolve through the crisis.  The fourth reverse was designed by Susan Gamble and sculpted by Joseph Menna

The obverse of the coin continues to feature the original portrait of Lincoln from Victor D. Brenner.

Details of the official launch ceremony have not yet been announced.