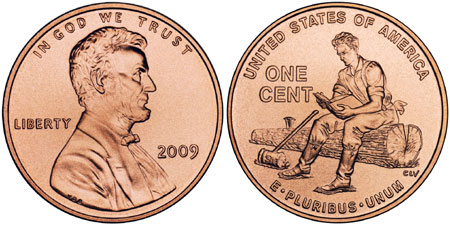 The second of the newly designed 2009 Lincoln Cent was released on May 14, 2009. The four different reverse designs will be released in roughly three month intervals throughout the year.

The second design represents Lincoln’s formative years spent in Indiana. He became skilled with a plow and axe. Although there was little time for formal education, Lincoln had a love of books which allowed him to educate himself. The design features a young Abraham Lincoln taking a break from rail splitting to read a book. The inscriptions included are “United States of America,” “E Pluribus Unum,” and “One Cent.” The second reverse was designed and sculpted by Charles Vickers.

The obverse of the coin continues to feature the original portrait of Lincoln from Victor D. Brenner. The inscriptions read “In God We Trust,” “Liberty,” and the date and mint mark.

The official launch ceremony took place in Lincoln City, Indiana. An estimated 3,000 people were on hand for the event. US Mint Director Edmund Moy was at the ceremony. A total of 20,000 rolls of freshly minted 2009 Rail Splitter Pennies were exchanged at the event.

Later in the year, the US Mint plans to release collectible versions of the coin struck in the original composition of 95% copper. These coins will be be available in US Mint issued annual coin sets.