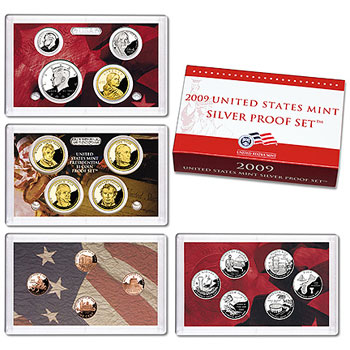 The 2009 United States Silver Proof Set will released by the US Mint on July 17, 2009. This is a special version of the proof set which contains 90% silver coins. The set is expected to be priced at $52.95, which will represent an increase of $8.00 from last years price. The increased price is a result of the expanded number of coins included in the set.

The 2009 Silver Proof Set will contain all designs for the 2009 Lincoln Cents, the 2009 District of Columbia & U.S. Territories Quarters, and 2009 Presidential Dollars. Rounding out the set will be the nickel, dime, half dollar, and Native American Dollar. In total, there will be 18 coins included in the set.

All coins will carry the “S” mint mark to designate the San Francisco Mint. The Roosevelt Dime, Kennedy Half Dollar, and six 2009 Quarters included in the set will be struck in a composition of 90% silver. The four 2009 Lincoln Cents will have a composition of 95% copper, 3% zinc, and 2% tin. The remaining coins will have the standard compositions used for circulation.

The following coins are included in the 2009 US Silver Proof Set: