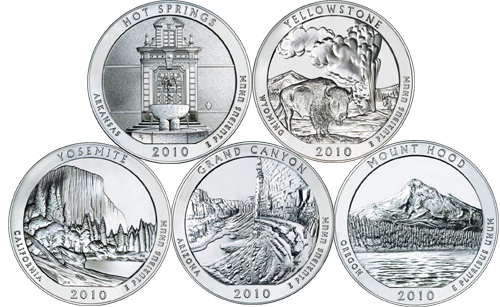 The first year of release for the United States Mint’s new 5 ounce silver bullion coin series was a challenging one. The unusual specifications for the coins caused a delay in production, which resulted in extremely low mintages.

Early in the year, the US Mint announced the purchase of a new coining press to be installed at the Philadelphia Mint and used for the new series. The installation took place March 1, 2010. Earlier testing revealed the challenges of a 5 oz. silver coin with a 3 inch diameter. The coins were apparently bendable by hand, and the application of edge lettering caused the planchets to crumple.

Eventually full scale production began on September 21, 2010. In early December, the US Mint revealed that mintages for the 2010 America the Beautiful Silver Bullion Coins would be extraordinarily low with only 165,000 produced across all five designs. At the same time, they announced that collectible uncirculated versions would be available with production of 135,000 across the five designs.

The 2010 releases include the following coins:

For future years of the series production levels are likely to be increased. The 2010-dated releases may remain the key dates of the series, created by the unusual circumstances of release and and the short time frame for production.