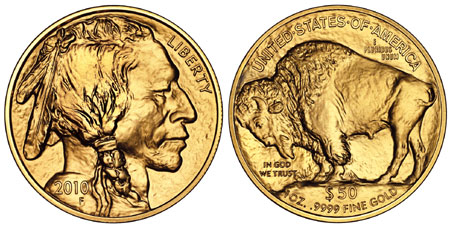 The 2010 Gold Buffalo will first be available from the United States Mint on April 29, 2010. On this date, the US Mint’s network of authorized purchasers may begin to place orders for the bullion version of the coin.

The American Gold Buffalo has been issued each year since 2006. The one ounce, 24 karat gold coins feature James Earle Fraser’s design for the Indian Head or Buffalo Nickel, issued for circulation from 1913 to 1938. The obverse of the coin features a Native American chief facing right and the reverse features the American Bison or Buffalo standing on a raised mound. The Gold Buffalo has been issued as a bullion coin and in one or more collectible versions.

Bullion versions of the coin are distributed through the US Mint’s authorized purchasers. They are able to purchase the coins directly from the Mint in bulk quantities based on the price of gold plus a fixed mark up. The coins are then resold to other coin dealers, bullion dealers, and the public. For 2009, the US Mint did not release the bullion version of the coin until October 15, 2009. The 2009 Gold Buffalo sold out after sales of 200,000 coins.

The collectible versions of the Gold Buffalo have included proof and uncirculated coins which carry the “W” mint mark. For the first two years of the series, only the one ounce proof version was issued for collectors. In 2008, the Mint produced and issued proof and uncirculated versions in four different sizes. For 2009, the US Mint reverted back to just issuing the one ounce proof coin. The 2009 Proof Gold Buffalo sold approximately 50,000 coins.

The US Mint has stated that they intend to issue the 2010 Proof Gold Buffalo later this year. Details of the release such as maximum mintage, release date, and household ordering limits remain unknown. When released, the coins will be priced according to the US Mint’s current pricing policy covering numismatic gold coins.