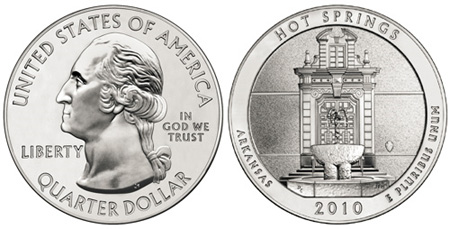 One of the first issues of the new series of America the Beautiful 5 oz. Silver Bullion Coins will feature Hot Springs National Park. The five different designs for 2010 will be released together on December 6, 2010 in bullion format. A collector version of the coin will be issued early in the following year.

The series of 5 ounce silver bullion coins carry designs, which are duplicates of the corresponding quarter dollar. The Hot Springs Quarter features a portrait of George Washington on the obverse designed by John Flanagan. The reverse, designed by Don Everhart, features a depiction of the facade of the park headquarters building with one of the park’s many fountains in the foreground of the scene.

The design as it appears on the bullion coin will be larger and more detailed compared to the quarter. This is due to the fact that the Mint is not hubbing dies for the bullion coins, but cutting them directly onto the dies from the original models.

The Hot Springs National Park Silver Bullion Coin will have a diameter of 3 inches and thickness of 0.16 inches. The maximum mintage will be 33,000 of the bullion version, and just 27,000 of the collector version of the coin.

Demand for this unique series is expected to be exceptionally high. The bullion coins may be available from some precious metals dealers, while the collector coins will be sold directly by the United States Mint.