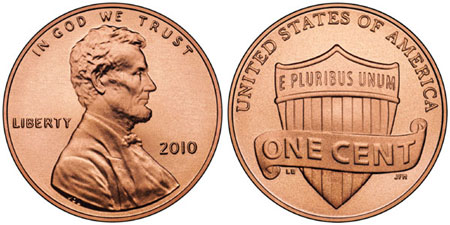 The 2010 Lincoln Cent features a brand new reverse design, which will replace the prior Lincoln Memorial reverse design for the foreseeable future. The  new design is issued following the four different reverse designs used on the 2009 Lincoln Cents, which highlighted the different stages of Abraham Lincoln’s life.

The design for the 2010 Lincoln Penny features the union shield. The shield dates back to the 1780’s, but was used widely during the civil war. Thirteen vertical stripes are bound by a horizontal bar to represent the thirteen original states bound together as a single union in support of the federal government. A scroll across the shield bears the denomination “One Cent”, the inscription “E Pluribus Unum” appears on the horizontal bar, and “United States of America” appears above the shield.

This design is intended to be “emblematic of President Lincoln’s preservation of the United States of America as a single and united country.” This guidance was provided in Public Law 109-145, which authorized the design changes for the denomination during 2009 and 2010.

The United States Mint initially provided a total of 18 different candidate designs to the Citizens Coinage Advisory Committee and Commission of Fine Arts for review and comment. The proposed designs featured one or a combination of several different themes, including the US Capitol building, a shield, different versions of American Flags, and eagles. The CFA backed the design known as LP-10, which depicted an American flag with 34 stars. The CCAC has backed the design known as LP-13, depicting the union shield. The final decision for the reverse design of the 2010 Lincoln Cent was made by the US Secretary of the Treasury.

The first 2010 Lincoln Cents appeared in circulation as early as mid-January 2010. The United States Mint held an official launch ceremony for the new designs on February 11, 2010. The 2010 Lincoln Cent mintage is on pace to be well into the billions of coins, as a contrast to the historically low mintages for the prior year coins.