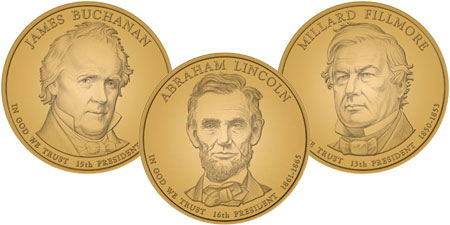 The ongoing Presidential Dollars coin series will enter its fourth year in 2010. During the first three years of the series, more than 1.7 billion of the golden colored dollars had been produced for circulation. Despite the large number produced, the public is yet to adopt any widespread circulation of the Presidential Dollar. The series may gain more attention with the 2010 releases, since the year will include one of the most famous Presidents.

The 2010 Presidential Dollars will honor the 13th to 16th Presidencies, covering the years from 1850 to 1865. The Presidents to be honored will include:

The designs of the 2010 dollars will follow the same general format of the series. The President’s portrait will be displayed on the obverse of the coin with inscriptions of the President’s name, order of Presidency, and years served. The motto “In God We Trust” will also appear on the obverse of the coin, where it was moved starting with the 2009 releases of the series. The reverse design of each coin will feature a rendition of the Statue of Liberty that was designed and sculpted by Don Everhart. This image has graced the reverse of each coin in the series to represent the concept of Liberty.

The official release date for the Millard Fillmore Dollar is scheduled for February 18, 2010. The remaining coins will be issued in roughly equal intervals throughout the year. Coins are expected to be produced at the Philadelphia and Denver Mint for circulation and the San Francisco Mint in high quality proof version for collectors.