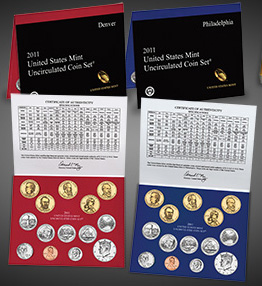 The 2011 Mint Set is the annual coin set issued by the United States Mint, containing coins from the Philadelphia and Denver Mints. This year, two important changes will occur for the popular offering.

The sets will be issued much earlier than has recently been the case, with the anticipated start of sales on February 8, 2011. The release date was moved forward in an effort to make some of the US Mint’s most popular product offerings available throughout the year. The sets will also feature a brilliant finish, rather than the satin finish used for the past six years. This change was made in order to produce more aesthetically pleasing coins for collectors.

There will be a total of 28 different coins included in the 2011 Mint Set. This will include 14 different issues from the Philadelphia Mint and the Denver Mint. Denominations from one cent to one dollar are represented.

Several newly implemented coin programs will continue within the set including the America the Beautiful Quarters, Presidential Dollars, and Native American Dollar programs.

The following coins are included in each 2011 Mint Set: