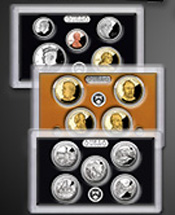 The United States Mint will begin sales of the 2011 Proof Set much earlier than typical in recent years. The initial offering date was moved forward in order to accommodate gift giving throughout the year and allow collectors the opportunity to update their sets earlier. The US Mint has announced a release date of January 11, 2011.

The 2011 Proof Set will include the same number of coins as the previous year, at 14 different coins. Each will be struck at the San Francisco Mint and carry the “S” mint mark. The coins will have a deep cameo proof finish, which features frosted raised design elements over mirrored background fields.

Three different coin series featuring rotating designs will continue within the set. The 2011 America the Beautiful Quarters will represent the second year of issue for the series depicting National Parks and sites from around the country. The Presidential Dollars Program will continue with portraits of the 17th to 20th Presidents of the United States. Lastly, the 2011 Native American Dollar will commemorate the Wampanoag Treaty, representing the first written peace alliance between Native Americans and European settlers.

The following coins are included in each 2011 Proof Set:

The US Mint will also issue separate sets containing only a portion of the coins. This will include the 2011 Presidential Dollars Proof St and 2011 America the Beautiful Quarters Proof Set.

This page is no longer maintained. For up to date information visit this site.