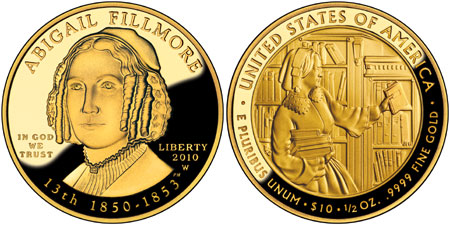 The United States Mint released the Abigail Fillmore First Spouse Gold Coin on March 19, 2010. This represented the first issue of the series for 2010, and the fourteenth coin released since the series began back in 2007. Each year, four or five coins have been issued to honor the Nation’s First Spouses with a unique 24 karat gold coin.

The obverse of the Abigail Fillmore First Spouse Coin features a portrait of the First Lady designed and sculpted by Phebe Hemphill. Obverse inscriptions include her name, the order of the Presidency, the years of the Presidential term, the motto “In God We Trust”, “Liberty”, and the date and mint mark of the coin.

The reverse features a scene of her Abigail Fillmore putting books on a shelf in the White House Library. She had acquired several hundred volumes to start the collection on the second floor oval parlor. The reverse was designed by Susan Gamble and sculpted by Joseph Menna. Inscriptions include “United States of America”, “E Pluribus Unum”, and the weight, fineness, and face value of the gold coin.

Each coin was struck in 24 karat gold with a bullion weight of one-half ounce. Both proof and uncirculated versions were produced at the West Point Mint. The United States Mint set the maximum mintage across both options at just 15,000. For previous releases of the series, the maximum had been set at 40,000 coins.