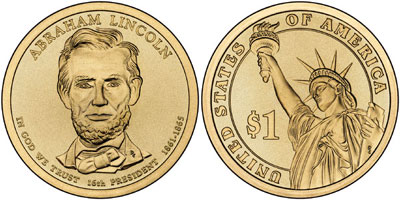 Abraham Lincoln has appeared on the one cent coin since 1909 without interruption. The denomination was used in 2009 to celebrate Lincoln’s Bicentennial by featuring four different reverse designs representing the different stages of his life. A fifth new design for the cent was introduced in 2010 to represent his legacy. These recent issues were extremely popular with collectors and the upcoming dollar coin is expected to generate a similar response.

The obverse of the Abraham Lincoln Presidential Dollar features his portrait , as designed and sculpted by Don Everhart. The obverse inscriptions include “Abraham Lincoln”, the motto “In God We Trust”, “16th President”, and the years served “1861-1865″.

The reverse of the coin will feature a rendition of the Statue of Liberty intended to represent the concept of Liberty. This was also designed and sculpted by Don Everhart. Reverse inscriptions read “United States of America” and “$1″.

The 2010 Abraham Lincoln Dollars are expected to be released for circulation and sold by the United States Mint in numismatic rolls, the 2010 Presidential Dollar Proof and Uncirculated Sets, the 2010 Proof Set, 2010 Silver Proof Set, and 2010 Mint Set. Details of an official release ceremony have not yet been announced.