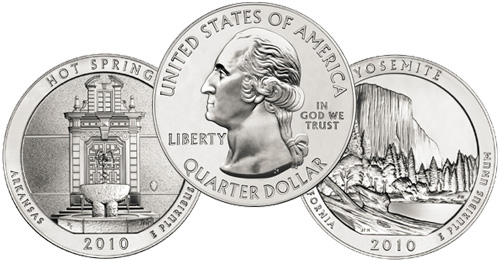 Each coin will be an exact duplicate of the corresponding quarter dollar coin, right down to the inscription “Quarter Dollar.” The coins will be struck in .999 fine silver with a bullion weight of five ounces and diameter of three inches. The weight and fineness of the coins would be indicated on incused edge lettering.

The order of release for the silver bullion coins will follow that of the quarter dollars. The authorizing legislation provides that each silver coin may be offered from the first day of the calendar year of the corresponding quarter’s release. The coins could only be offered until the end of the calendar year. For 2010, the United States Mint will release the bullion coins on December 6, 2010. Collectible uncirculated versions will be available during the first quarter of 2011.

The authorizing legislation provides special privileges for the Director of the National Park Service with regards to the new bullion coins. The Director or his agent may purchase the coins directly from the United States Mint for direct resale to the public. These coins may even be repackaged prior to resale, to create a unique collectible.