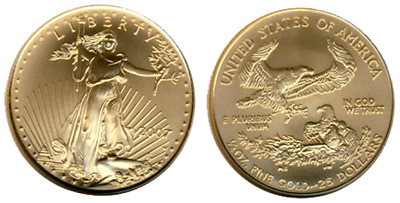 The obverse design for the Gold Eagle is taken from the classic gold double eagle coin minted from 1907 to 1933 designed by Augustus Saint Gaudens. It features a striking rendition of Liberty carrying a torch and olive branch, against a rising sun. The United States Capitol is visible in the background. The inscriptions included on the obverse are “Liberty” and the date.

The reverse design features an eagle above an eagle’s nest. This was designed by Miley Busiek specifically for the American Gold Eagle. The inscriptions included on the reverse are “United States of America”, “E Pluribus Unum”, “In God We Trust”, and the weight and denomination of the coin.

American Gold Eagles have been issued in collectible proof versions since the beginning of the series. In 1986, only a one ounce proof coin was produced. In 1987, both one ounce and one-half ounce proof coins were produced. Starting in 1988, all four denominations were produced in prof versions. From 2006 to 2008, collectible uncirculated versions of the coin were issued in each denomination. In 2006, a special 10th Anniversary Gold Eagle Set was released, which included an uncirculated, proof, and reverse proof one ounce Gold Eagle.