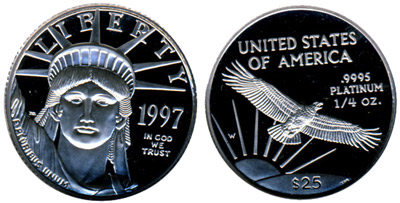 The American Platinum Eagle was authorized by Congress in 1996 as an addition to the American Eagle Bullion Coin Program. The coins were first released in 1997 and have been issued each subsequent year. The Platinum Eagle represents the first and only investment grade platinum coin produced by the United States Mint.

The obverse design of the coin features the Statue of Liberty. This rendition was designed by John Mercanti. The inscriptions included on the obverse are “Liberty”, “E Pluribus Unum”, “In God We Trust”, and the date. The original reverse design features a bald eagle soaring through the air against a rising sun. This was designed by Thomas D. Roger Sr. The inscriptions included on the reverse are “United States of America”, “.9995 Platinum”, the denomination, and platinum content.

Platinum Eagles have been issued in proof versions for collectors since the series began. Each year following the initial release in 1997, the reverse has featured a new design created exclusively for the proof coins. From 2006 to 2008, collectible uncirculated versions of the coin were also issued. In 2007, a special 10th Anniversary Platinum Eagle Set was issued.