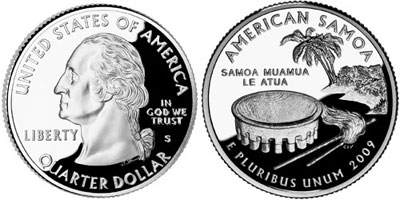 The American Samoa Quarter will be the fourth release of the DC & US Territories Quarter Program. This program will honor the District of Columbia and each United States Territory with their own unique quarter design.

American Samoa first had contact from the West in the early 1700s. English missionaries and traders arrived in the 1830s. The United States was given claims over the area under the Treaty of Berlin of 1899. American Samoa officially became a United States territory in 1929.

The reverse design depicts several items from special Samoan ceremonies. The ava bowl is used to make a ceremonial drink for special events. The whisk and staff are symbolic of the rank of Samoan orator. The inscriptions read “American Samoa”, “Samoa Muamua Le Atua” (translated: “Samoa, God is First”), “E Pluribus Unum”, and the date. The reverse of the coin was designed by Stephen Clark and sculpted by Charles Vickers.

The obverse design of the American Samoa Quarter will continue to use the rendition of the George Washington from the prior 50 State Quarters Program, which was designed by John Flanagan after the William Cousins original.

The American Samoa Quarter has a tentative release date scheduled for July 27, 2009. Proof coins and 90% silver proof coins have already been produced by the San Francisco Mint and released in US Mint sets.