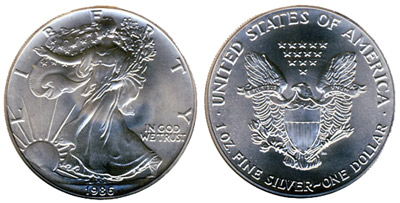 The American Silver Eagle was authorized by Congress in 1985 as part of the American Eagle Bullion Coin Program. This allowed the production of gold and silver bullion coins for sale to the public. Coins were first released in 1986 and have been issued each subsequent year. As the official silver bullion coin of the United States, the weight, content, and purity of each coin are guaranteed by the US government.

The obverse design chosen for the series is taken from the Walking Liberty Half Dollar coin designed by Adolph Weinman. Many consider this to be the most beautiful design for a silver US coin so it made a fitting choice. The reverse was newly designed by John Mercanti. It depicts a heraldic eagle with shield.

Although envisioned as bullion coins, many coin collectors find interest in the series. The US Mint has also issued special versions of Silver Eagles especially for collectors. This includes the proof coin, which has been issued since 1986; the reverse proof coin, issued for the 20th anniversary of the coin in 2006; and a collectible uncirculated version of the coin, which has been issued since 2006.

The key date for the series is the 1995-W Proof Silver Eagle with a mintage of only 30,125. This coin was only issued as part of the 1995 Gold Eagle Proof Set, resulting in an incredibly low mintage. Ten years later, the US Mint produced the 20th Anniversary Silver Eagle Set with a production run of 250,000 coins. This set included a special reverse proof Silver Eagle.