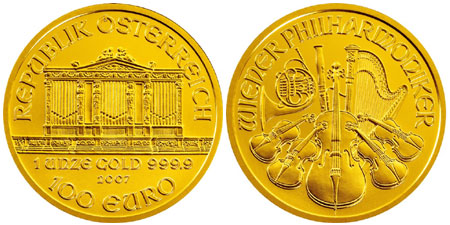 The Austrian Gold Philharmonic is a popular gold bullion coin produced by the Austrian Mint in Vienna. It was the best selling gold coin worldwide for the years 1992, 1995, and 1996. It also has the distinction of being the first gold bullion coin denominated in Euros.

The Gold Philharmonic was created to honor the Vienna Philharmonics Orchestra, which is known as one of the greatest musical ensembles. The obverse of the coin depicts the Great Organ from the concert hall. Inscriptions indicate the gold content, .9999 gold purity, and the year of mintage. The reverse design features a collection of instruments from the orchestra and “Wiener Philharmoniker” (Vienna Philharmonic).

Starting in 2008, the Silver Philharmonic has also been produced. This coin carries an identical design to the gold coin, with the exception of the obverse inscriptions which state the metal content and face value.