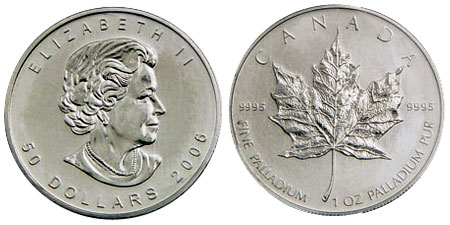 The obverse of the coin features an image of Queen Elizabeth II with inscriptions of “Elizabeth II”, the denomination “$50 Dollars”, and the date. The reverse features the Canadian Maple Leaf and the inscriptions “Canada”, “9995 Fine Palladium”, “1 oz”, and “9995 Palladium Pur”.

The Palladium Maple Leaf sold a relatively small number of coins during the three years the coin was produced. For the first year of availability, production was limited to 40,000 coins. After the initial year, demand dictated smaller mintages. By the third year, the number of coins produced had declined to about 15,000 coins and the coin was discontinued. As a result of the limited distribution and the coin’s status as the only government issued palladium bullion coin, the Palladium Maple Leaf usually sells at a significant premium to the precious metal value.