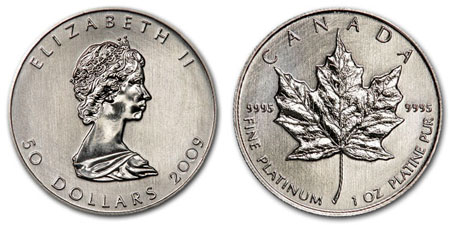 The obverse of the Platinum Maple Leaf features an image of Queen Elizabeth II. For different years of the series, different images of the Queen have been used. The obverse inscriptions include “Elizabeth II”, “50 Dollars”, and the date. The reverse of the coin features the Maple Leaf, which is the national symbol of Canada. the reverse inscriptions include “Canada”, “9995 Fine Platinum”, 9995 Platine Pur” and the weight. This is the same design used by the other Maple Leaf coins such as the Gold Maple Leaf and Silver Maple Leaf.