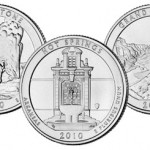 Series Information A new series of location themed quarter dollars began in 2010, known as the America the Beautiful Quarters. This new series follow the success and mirrors the format of the previous 50 State Quarters and District of Columbia & U.S. Territories Quarters programs. For the present series, the focus will turn to the […] 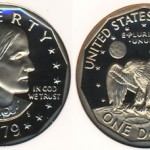 Susan B. Anthony Dollars were produced by the United States Mint from 1979 to 1981, and for one final year in 1999. Although unpopular in circulation, the series was important as the first small sized dollar coins. A number of notable varieties also exist for collectors, expanding the scope of the otherwise short set. The […] 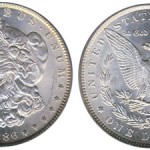 Morgan Dollars represent one of the most popular series for coin collectors. Designed by George T. Morgan, the silver dollars were issued between the years 1878 and 1921. With a total of 97 different basic date and mint mark combinations, the series offers something for both beginning and experienced collectors. Many issues survive in abundance […] 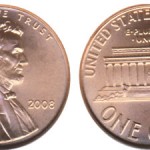 The Lincoln Cent was first issued in 1909 to replace the former Indian Head Cent, which was minted for the last time also in 1909. The new series was launched to coincide with the 100th anniversary of the birth of Abraham Lincoln. At various subsequent anniversaries, the reverse design of the Lincoln Cent would be […] 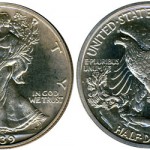 The Walking Liberty Half Dollar was introduced in 1916 to replace the Barber Half Dollars series, which concluded in the previous year. The new series was the result of a design contest for a new half dollar. The winner of the contest was Adolph A. Weinman, who was also the winner of a contest to […] 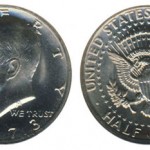 The Kennedy Half Dollar was introduced in 1964, prematurely putting an end to the prior Franklin Half series. The coin was created as a way to memorialize President John F. Kennedy who had been assassinated in the prior year. The series was immediately popular with the public, and remains popular with coin collectors today. The […] 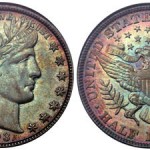 Along with a similarly redesigned dime and quarter, the Barber Half Dollar was introduced in 1892. The coins were all designed by Charles E. Barber, who was the current Chief Engraver of the United States Mint. The obverse of the coin depicts Liberty facing right, wearing a cap with a wreath of laurel tied around. […] 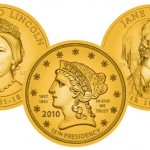 Coin Series The series created to honor the spouses of the Presidents will enter its fourth year in 2010. First Spouse Gold Coins have been issued each year since 2007, featuring the First Spouses in the order of the Presidencies. Generally four different First Ladies are presented per year, but there have been some notable […] 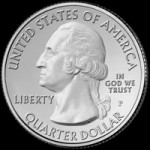 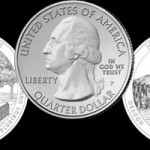 Coin Information The America the Beautiful Quarters series begins in the year 2010. After eleven years of rotating designs presented through the prior State Quarters series and DC & US Territories Quarters series, collectors have become familiar with the process. There will be five different reverse designs issued during the year, featuring a unique scene […]