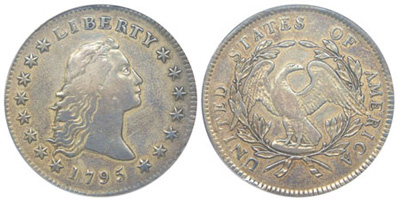 The Flowing Hair Silver Dollar was produced for two years from 1794 to 1795 and represents the first silver dollars struck in the United States. Due to their important place and history, the low mintages, and only two years of production, these coins are prized by collectors at all grade levels. Many are happy to acquire an example of the coin even if it exhibits problems such as cleaning or damage.

The silver dollar was included as one of the denominations authorized under the Coinage Act of 1792. The coins have a composition of 89.24% silver and 10.76% copper. The weight is 26.29 grams and the diameter can vary slightly from 39 to 40 mm. The denomination is placed on the edge as “Hundred Cents One Dollar or Unit”.

Designs for the coin were created by Robert Scot, who was also responsible for other of the early Mint’s coinage designs. Liberty is pictured on the obverse with her hair flowing slightly backwards in the wind. The word “Liberty” appears above with fifteen stars surrounding the image. This represented the current number of states. Later U.S. coinage would revert to thirteen stars, representing the original thirteen states.

The reverse includes an American Eagle, chosen for a symbol on the coinage. It is placed within an wreath tied with a ribbon and open at the top. The words “United States of America” surrounds. The denomination did not appear on either the obverse or reverse, but only the edge of the coin.

The undisputed key date of the series is the 1794 Flowing Hair Dollar, which had just 1,758 pieces released. Fewer than 10% of this original number is estimated to still exist. Famously, an exceptional quality piece believed to be the first silver dollar ever struck by the United States Mint sold for $7,850,000, representing the highest price ever paid for a coin.