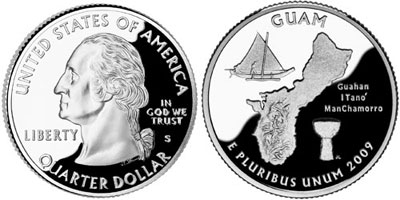 The Guam Quarter will be the third release of the D.C. & U.S. Territories Quarter Program. This program will honor the District of Columbia and each U.S. Territory with its own unique quarter design.

Ferdinand Magellan made the first Western contact with Guam in 1521. Spanish rule of Guam ended during the Spanish-American War when America secured the island. The people of Guam became American citizens in 1950 and established local government under the Organic Act of 1950.

The reverse design of the coin features an outline of the island, a sailing vessel called the Flying Proa, and a Latte used as a base for homes. The inscriptions read “Guam”, “Guåhan Tånó I Man Chamorro (translated: “Guam- Land of the Chamorro”), “E Pluribus Unum”, and the date. The Chamorro is one of the official languages of Guam. Its usage is seeing a renaissance in modern times and provides a link to their ancestors. The reverse of the coin was designed by David Westwood and sculpted by Jim Licaretz.

The obverse design of the Guam Quarter will continue to use the rendition of the George Washington from the prior 50 State Quarters Program, which was designed by John Flanagan after the William Cousins original.

The Guam Quarter was released on May 26, 2009. Proof and 90% silver proof versions of the coin were produced at the San Francisco Mint. These proof coins were issued in US Mint sets.