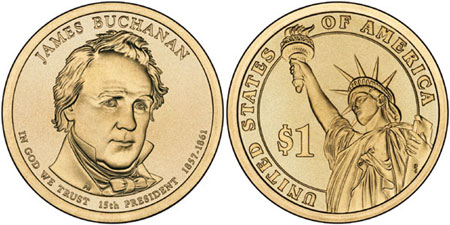 The James Buchanan Presidential Dollar will be released on August 19, 2010 as the fifteenth release of the overall Presidential Dollar coin series. This series of circulating dollar coins began in 2007 to honor the former presidents of the United States in the order served.

The obverse inscriptions include the “James Buchanan”, the motto “In God We Trust”, “15th President”, and the years served “1857-1861″. The reverse inscriptions read “United States of America” and the denomination expressed as “$1″. The edge of the coin featured incused edge lettering with “E Pluribus Unum”, the date, mint mark, and an arrangement of thirteen stars.

The James Buchanan Presidential Dollar will be produced for circulation at the Philadelphia and Denver mint facilities. The coins will also be produced in collectible proof version at the San Francisco Mint.

In February and April 2010, the US Mint issued the Presidential Dollar Proof and Uncirculated Sets, which contain the Buchanan Dollar. Other products such as the annual proof and mint sets will also contain the coin.