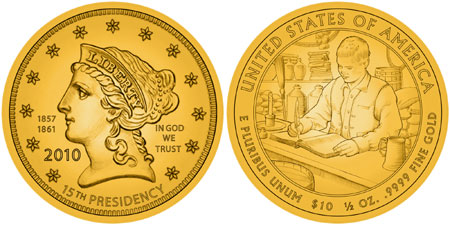 The obverse of the coin will be a reproduction of the Liberty Head Quarter Eagle, which was originally minted and issued from 1840 to 1907. The coin was originally designed by Christian Gobrecht. The required inscriptions have been added to include the order of the Presidency, years of the term, “In God We Trust”, and the current date.

The reverse of James Buchanan’s Liberty First Spouse Gold Coin features a scene from his youth when he worked as a book keeper in his family’s small country store. The required inscriptions are placed within a circle around the circumference of the coin. The reverse image image was designed by David Westwood and sculpted by Joseph Menna.

The coins are expected to be released in September 2010 with a maximum authorized mintage of 15,000 coins across the proof and uncirculated versions. The details will be confirmed closer to the release date.