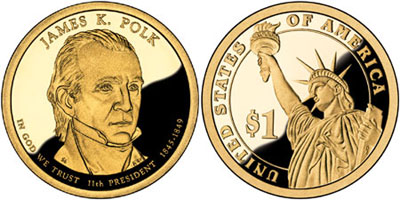 The James K. Polk Presidential Dollar is scheduled to be released on August 20, 2009. This will mark  the third Presidential Dollar coin of 2009 and the eleventh release of the series overall. Details of any official launch ceremony are yet to be announced.

The obverse of the coin was designed by Susan Gamble and sculpted by Charles Vickers. It features a portrait of James K. Polk and the inscriptions “In God We Trust,” “James K. Polk,” “11th President,” and the years of his presidential term “1845-1849″. After controversy of prior years, the motto “In God We Trust” was moved to the obverse of the coin.

Production figures for the James K. Polk Presidential Dollar are yet to be known.