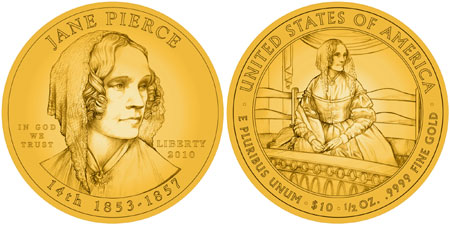 The Jane Pierce First Spouse Gold Coin will be issued by the US Mint as the fifteenth release in the series honoring the First Ladies of the United States. The one-half ounce, 24 karat gold coin is expected to be released in June 2010.

The obverse design for the coin features a portrait of Jane Pierce along with the required inscriptions of the series. Inscriptions include her name above the portrait, the motto “In God We Trust” to the left, “Liberty” along with the date and mint mark to the right, and the order and dates of the Presidency below. The obverse was designed by Donna Weaver and sculpted by Don Everhart.

The reverse of the Jane Pierce First Spouse Coin depicts a scene of her in the visitors gallery of the Old Senate Chamber. She is known to have sat here to listen to the debates concerning the issue of slavery. The reverse inscriptions include “United States of America” and “E Pluribus Unum” with indications of the coin’s gold weight and fineness. The reverse was designed by Donna Weaver and sculpted by Charles Vickers.

The Jane Pierce coins will be offered in proof and uncirculated versions. The coins will have a maximum authorized mintage of 15,000 coins across both versions. This is a sharp reduction in the maximum mintage levels set for coins during the earlier years of the series.