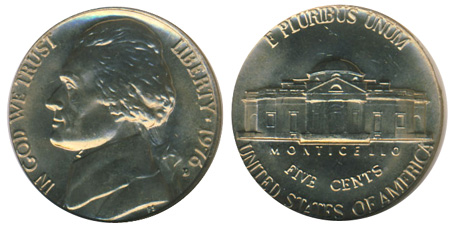 The Jefferson Nickel has the distinction of being a series that is accessible to new collectors and challenging to advanced collectors. The series was introduced in 1938, replacing the previous Buffalo Nickels. The new design was created by Felix Schlag and featured a portrait of Thomas Jefferson on the obverse and a depiction of his home Monticello on the reverse. Earlier dates of the series can sometimes be found within circulation, making assembling an affordable set a distinct possibility. On the other end of the spectrum, some issues are extremely elusive with full steps, creating enormous premiums.

The original design was used for nearly seven decades without major alteration. In 2004, a series of new designs known as the Westward Journey Nickels were introduced to mark the Louisiana Purchase and the expedition of Lewis and Clark. A series of four different reverse designs were used, including one depicting a buffalo, along with two different obverse designs. From 2006, a new obverse portrait by Jamie Franki and the original reverse design by Felix Schlag would serve as the new permanent design.

One of most notable issues of the series is the 1950-D Jefferson Nickel. The low mintage of 2,630,030 caused collectors to hoard large quantities of the issue. Prices rose to high levels, before eventually peaking, and crashing. The widespread hoarding of the issue results in abundant supplies of uncirculated examples of this coin.

“Full steps” refers to the steps visible at the base on Monticello on the reverse of the coin. Specialized collectors will pursue Jefferson Nickels that have five or six steps visible, which are uninterrupted by contact marks, strike weakness, or planchet flaws. Many issues of the series are exceedingly difficult to find with qualifications to meet the designation, resulting in large premiums.

The Jefferson Nickel carried the composition of 25% nickel and 75% copper for the entire series, except for a brief period from 1942 to 1945. During this time, the copper content was reduced, nickel was eliminated, and silver and manganese were added. The change was instituted in order to save strategic metals for the war effort. The composition of the nickel has recently become a topic of discussion as the intrinsic value of the coins exceeds face value, although it is illegal to melt the coins.