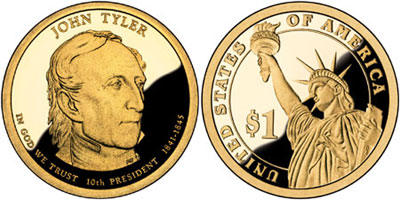 The John Tyler Presidential Dollar was released into circulation on May 21, 2009. This marked the second release of the year for the series of golden colored dollar coins honoring the former presidents, and the tenth release of the series overall. An official launch ceremony was held at Sherwood Forest Plantation in Charles City County, Virginia. The United States Mint Deputy Director Andrew Brunhart attended the ceremony.