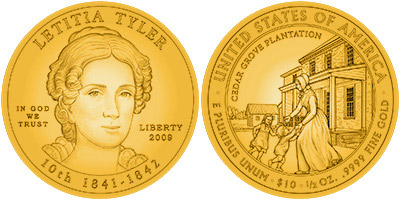 The Letitia Tyler First Spouse Gold Coin will be released during 2009 as the tenth release of the First Spouse Gold Coin Program. During 2009 a total of five different coins will be issued for the series. Letitia Tyler also served as the Second Lady for the month that her husband was William Henry Harrison’s Vice President. After her husband became President through succession, she served as First Lady until her death in 1842.

The obverse of the coin features a portrait of Letitia Tyler designed and sculpted by Phebe Hemphill. The inscriptions include “Letitia Tyler,” “In God We Trust,” and “Liberty.” Also included are the date, mint mark, years served as First Spouse “1841-1842″ and order of the Presidency “10th.”

The reverse of the coin depicts Mrs. Tyler with her two oldest children on Cedar Grove Plantation. She successfully ran the plantation allowing her husband to pursue his political career. The reverse was designed by Susan Gamble and sculpted by Norman E. Nemeth. The inscriptions include “United States of America,” “E Pluribus Unum,” “.9999 Fine Gold,” the denomination “$10,” gold content “1/2 oz.” and “Cedar Grove Plantation.”

The release date for the Letitia Tyler First Spouse Gold Coin is scheduled for July 1, 2009.