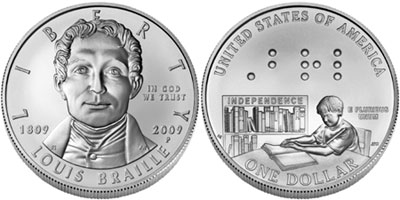 The coins will be issued to celebrate the 200th anniversary of the birth of Louis Braille, the inventor of the Braille System of writing for the blind and visually impaired. Silver dollar coins will be issued in a quantity of up to 400,000 coins. Coins will be available in both proof and uncirculated versions. A surcharge added to the price of each coin will be distributed to the National Federation of the Blind.

The obverse of the coin features a portrait of Braille designed by Joel Iskowitz and sculpted by Phebe Hemphill. It includes the inscriptions, “Louis Braille”, “Liberty”, “In God We Trust”, and the bicentennial dates “1809” and “2009”.

The reverse of the coin features a young child reading a Braille book. It was designed by Susan Gamble and sculpted by Joseph Menna. It includes inscriptions reading “United States of America”, “One Dollar”, and “E Pluribus Unum”. The word “Independence” is on a bookshelf behind the child. The word “Braille” is also spelled in readable Braille Code. This is the first time that readable Braille has appeared on a United States coin.

The Louis Braille Commemorative Coin was  released on March 26, 2009. The US Mint issue price upon release was during a “pre-issue” discount period was $37.95 for the proof version and $31.95 for the uncirculated version of the coin. After the end of the discount period regular prices of $41.95 and $33.95 went into effect.