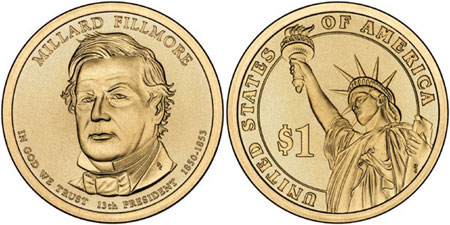 The obverse of the coin features a portrait of Millard Fillmore designed and engraved by Don Everhart. The inscriptions include “Millard Fillmore”, the motto “In God We Trust”, the order served “13th President” and the years of the Presidential term “1850-1853″.

The reverse or tails side of the coin will feature the Statue of Liberty. This design has been used in common for all releases of the Presidential Dollar series. Reverse inscriptions include “United States of America” and the denomination “$1″. Both the obverse and reverse were designed and sculpted by Don Everhart.

Mintage levels for the Fillmore Dollar set a new low for the Presidential Dollar series. The combined circulation mintage of 74,480,000 came in about 4 million below the next lowest mintage coin, the Zachary Taylor Dollar.