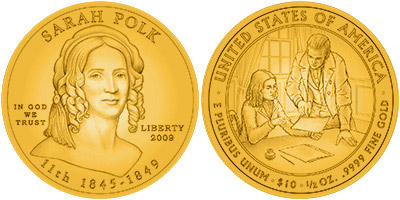 The obverse of the coin features a portrait of Sarah Polk designed and sculpted by Phebe Hemphill. The inscriptions include “Sarah Polk,” “In God We Trust,” and “Liberty.” Also included are the date, mint mark, years served as First Spouse “1845-1849″ and order of the Presidency “11th.”

The reverse of the coin depicts Mrs. Polk serving in the capacity of private secretary for her husband, President James K. Polk.  Throughout their marriage, she had worked to further her husband’s political career. The reverse was designed and sculpted by Phebe Hemphill. The inscriptions include “United States of America,” “E Pluribus Unum,” “.9999 Fine Gold,” the denomination “$10,” and gold content “1/2 oz.”

The release date for the Sarah Polk First Spouse Gold Coin is scheduled for fall 2009.