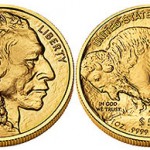 Gold Coin Information The American Gold Buffalo was the first 24 karat gold bullion coin produced by the United States Mint. The coins were first offered in 2006 as one ounce bullion coins and one ounce proof coins. The same line up was offered the following year. Early in 2008, the US Mint announced that […]