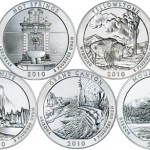 Coin Information The first year of release for the United States Mint’s new 5 ounce silver bullion coin series was a challenging one. The unusual specifications for the coins caused a delay in production, which resulted in extremely low mintages. Early in the year, the US Mint announced the purchase of a new coining press […]