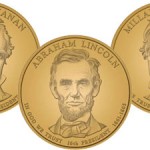 The ongoing Presidential Dollars coin series will enter its fourth year in 2010. During the first three years of the series, more than 1.7 billion of the golden colored dollars had been produced for circulation. Despite the large number produced, the public is yet to adopt any widespread circulation of the Presidential Dollar. The series […]