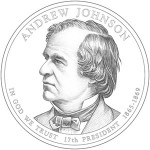 Coin Information The Andrew Johnson Presidential Dollar will be released on February 17, 2011. The coin begins the fifth year of release for the series issued to honor the former Presidents in the order served. The same format established for the series will be retained for the latest releases. A portrait of the President being […]