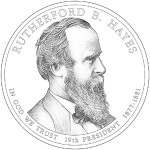 Coin Information The third release of the year for the ongoing series will be the Rutherford B. Hayes Presidential Dollar. He was the 19th President of the United States, with his term from 1877 to 1881. The obverse design for the coin has been released by the United States Mint in line-art format. The former […]