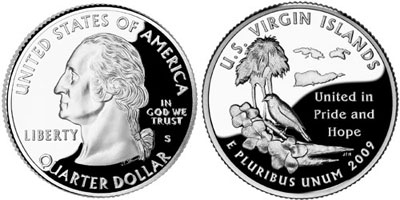 The US Virgin Islands Quarter will be the fifth release of the DC & US Territories Quarter Program. This program will honor the District of Columbia and each United States Territory with its own unique quarter design.

The obverse design of the Virgin Islands Quarter will feature the rendition of the George Washington from the prior State Quarters Program. This was designed by John Flanagan following the William Cousins original design.

The US Virgin Islands Quarter has a tentative release date scheduled for September 28, 2009. Proof and 90% silver proof coins have already been produced by the San Francisco Mint and released in US Mint issued sets.