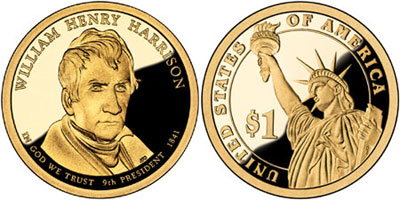 The obverse of the coin was designed and sculpted by Joseph Menna. It features a portrait of William Henry Harrison and the inscriptions “In God We Trust,” “William Henry Harrison,” “9th President,” and the year of his presidential term “1841”. Notably this will be the first Presidential Dollar coin to carry “In God We Trust” on the obverse of the coin rather than the edge.

The William Henry Harrison Dollar had the lowest mintage for the series to date with 43,260,000 coins produced by the Philadelphia Mint and 55,160,000 produced by the Denver Mint.