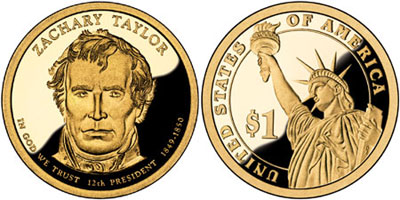 The reverse of the coin carries the rendition of the Statue of Liberty which was also designed and sculpted by Don Everhart. This is used as the common reverse design for the entire series. The inscriptions read “United States of America” and the denomination “$1″.

Production figures for the Zachary Taylor Presidential Dollar are yet to be known.