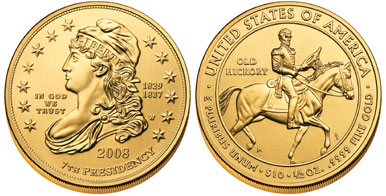 The Andrew Jackson’s Liberty First Spouse Gold Coin was offered for sale by the US Mint on August 28, 2008. This represented the seventh coin released on for the series, and the third coin released for 2008. When the Andrew Jackson coin went on sale, the prior three releases honoring Dolley Madison, Elizabeth Monroe, and Louisa Adams all remained on sale at the US Mint.

The obverse of Andrew Jackson’s Liberty was originally designed and sculpted by John Reich. This image was used on the Capped Bust, Lettered Edge Half Dollar, which was minted from 1807 to 1836. Since Andrew Jackson did not have a spouse while serving as President, an image of Liberty form a circulating coin in his era was used as the obverse design. The inscriptions “In God We Trust” and “Liberty” are included. Also included are the date and mint mark, years of Jackson’s Presidential term “1829-1837″ and “7th Presidency.”

The reverse of the coin was designed by Justin Kunz and sculpted by Don Everhart. The reverse depicts Andrew Jackson on horseback. He was a war hero who led troops against the British Army in the Battle of New Orleans. He earned the nickname “Old Hickory” which is inscribed on the coin.

Andrew Jackson’s Liberty First Spouse Coins are available with both proof and uncirculated finishes. The coins had a maximum authorized mintage of 40,000 coins across both options. The coins will remain on sale for approximately one year from the start date of sales.