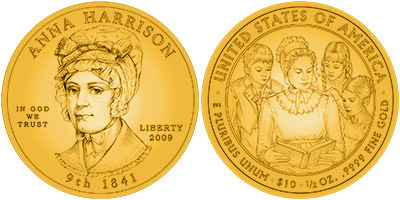 The obverse of the coin features a portrait of Anna Harrison designed by Donna Weaver and sculpted by Joseph Menna. The inscriptions include “Anna Harrison,” “In God We Trust,” and “Liberty.” Also included are the date, mint mark, years served as First Spouse “1841” and order of the Presidency “9th.”

The reverse of the coin depicts Mrs. Harrison teaching three children. Education was central to her life. She educated her own children and started two schools with her husband. The reverse was designed by Thomas Cleveland and sculpted by Charles Vickers. The inscriptions include “United States of America,” “E Pluribus Unum,” “.9999 Fine Gold,” the denomination “$10,” and gold content “1/2 oz.”

The release date for the Anna Harrison First Spouse Gold Coin was March 5, 2009. To date, more than 6,000 coins have been sold by the United States Mint.