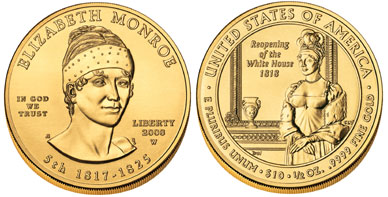 The Elizabeth Monroe First Spouse Gold Coin was released by the US Mint on February 28, 2008. This was the fifth coin released for the series and the first coin released for 2008. At the time of release, the prior coin honoring Dolley Madison remained on sale.

The obverse of the Elizabeth Monroe coin was designed by Joel Iskowitz and sculpted by Don Everhart. It features a portrait of Dolley Madison and the inscriptions, “Dolley Madison,” “In God We Trust,” and “Liberty.” Also included are the date and mint mark, years served as first spouse “1817-1825″ and order of the Presidency “5th.”

The reverse of the coin was designed by Donna Weaver and sculpted by Charles Vickers. The reverse depicts Elizabeth Monroe at the reception to reopen the White House in the year 1818 after it had been burned in the War of 1812. An inscription reads “Reopening of the White House 1818″.

Elizabeth Monroe First Spouse Coins were issued with both proof and uncirculated finishes. The coins had a maximum authorized mintage of 40,000 coins. The proof version sold 7,933 coins and the uncirculated version sold 4,519.