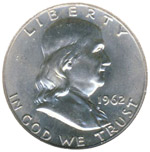 The Franklin Half Dollar series was relatively short lived. The coin was only issued for 16 years between 1948 and 1963. During this time, coins were produced at the Philadelphia, Denver, and San Francisco Mints, although there were many years when one or more of the Mints did not produce coins.