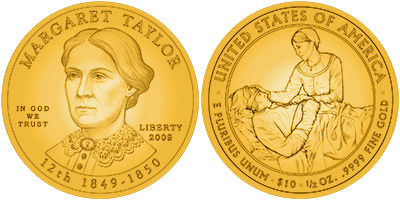 The obverse of the coin features a portrait of Margaret Taylor designed by Phebe Hemphill and sculpted by Charles Vickers. The inscriptions include “Margaret Taylor,” “In God We Trust,” and “Liberty.” Also included are the date, mint mark, years served as First Spouse “1849-1850″ and order of the Presidency “12th.”

The reverse of the coin depicts Mrs. Taylor nursing a soldier during the Seminole War. Before her husband Zachary Taylor became president, she followed her husband during his military career to various remote hardship outposts.  The reverse was designed by Mary Beth Zeitz and sculpted by Jim Licaretz. The inscriptions include “United States of America,” “E Pluribus Unum,” “.9999 Fine Gold,” the denomination “$10,” and gold content “1/2 oz.”

The release date for the Margaret Taylor First Spouse Gold Coin is scheduled for winter 2009.