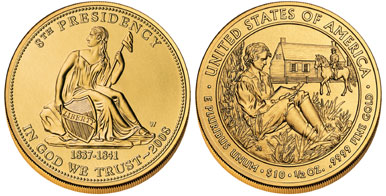 The obverse of Martin Van Buren’s Liberty was originally designed and sculpted by Christian Gobrecht. This image was used on the Liberty Seated Dime, which was produced from 1837 to 1891.  Because Martin Van Buren served as President without a spouse, an image of the allegorical Liberty figures from a circulating coin of his era has been used.  The inscriptions “In God We Trust” and “Liberty” are included. Also included are the date and mint mark, years of Van Buren’s Presidential term “1837-1841″ and “8th Presidency.”

The reverse of the coin was designed by Thomas Cleveland and sculpted by Jim Licaretz. The reverse depicts the young Martin Van Buren reading a book under a tree. Notably, Martin Van Buren was the first President to be born in America while it was an independent nation.

Martin Van Buren’s Liberty First Spouse Coins are available with both proof and uncirculated finishes. The maximum authorized mintage for the coins is 40,000 units across both options. The coins will remain on sale for approximately one year from the start date of sales.